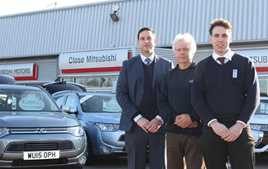 Mitsubishi has appointed a new dealer in Peterborough.

The family-run Close Motor Company has taken over the Newark Road franchise from Unity, retaining all the staff that were there and turning it from a multi-branded site to one that’s exclusively Mitsubishi.

Close has operated a Mitsubishi dealership for 16 years in Corby, 30 miles away.

The Peterborough site, which is currently undergoing a refurbishment and modernisation, has a six-car showroom plus space for 40 used cars on its forecourt, as well as a five-bay workshop and a fully operational parts department.

Director and dealer principal Simon Close said: ‘I’m very excited about the future for the Peterborough site. Taking it on has been a big step for us because we’ve doubled the size of our business, but it’s something we’re really proud of.

“We believe we’ve represented Mitsubishi to a good standard in Corby for the past 16 years and we want to replicate that in the Peterborough area.’

Close Motor Company  was set up in 1960 by Close’s grandfather, Donald, expanding over the years in the area while representing a number of franchises, with Donald’s son Bob coming on board and now Bob’s sons Simon and Craig, who is the parts manager.

Simon Close said: “There are people in this area who would have dealt with us historically when we had a Toyota dealership near here but who didn’t want to go to Corby as it was too far, but we are now back in the area. Yes, we’re a different company, and yes, we’ve rebranded, but we are ultimately the same people.

“We can pick up new best practices from each site as well as influencing best practices at both. We promote interaction between the two sites. We work as one, even though we’re working from different locations.”

Craig said: “Corby performs consistently and the additional site gives us the opportunity to challenge ourselves, allowing the business as a whole to grow rather than possibly stagnate.”

The company is also looking to expand the Peterborough dealership’s staffing levels – currently at nine – to 15 within 18 months.

“Instead of playing catch-up with the models and trying to keep up with the rest of the market place, we’re ahead of it.

“We have a lot to be thankful for to Mitsubishi, for supporting us and giving us the opportunity with the right products at the right price. It gives us confidence as well that Mitsubishi are behind us, but I think they know what we will give them and that is stability, process and consistency. We want things done on time, every time, right first time, and not only do we promote that to the customers but we promote it internally as well with the staff.”