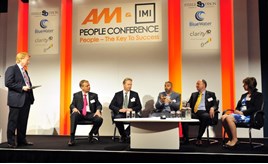 An expert panel will tackle issues such as whether a flexible workplace would make the sector more appealing to a wider range of people workforce diversity, graduate recruitment and the younger generation.

The expert line-up of automotive industry retailers will take to the stage as part of AM’s People Conference.

Taking place on June 16 at the Park Plaza River Bank, London in conjunction with the Institute of the Motor Industry (IMI), the conference, now in its third year, once again precedes the prestigious AM100 Dinner.

Panellists will provide their own views as well as incorporate insights from their own experience.

Questions will be raised by the conference chairman Steve Nash, chief executive of the IMI, and taken from the floor so a lively debate among panellists and delegates is expected.

The panel members are:-

First starting out in contact centres, Young progressed to training and recruitment for Orange contact centre employees at a time of major growth for the mobile network provider. A role with independent advertising agency Pearsons gave Young exposure to the digital revolution in the recruitment sector.

A position at Vertu Motors provided her first taste of automotive retailing and after a stint in the health industry, Young took up her current role at Carshop.

A successful media career and homefinding business preceded a joint venture with her master technician husband Steve when Russell Automotive Centre was founded in 2007. Despite the recession, the business flourished and expanded incorporating a second garage in 2009 – Garage Expresss. Russell Automotive Centre has won Best Independent Audi Service Provider every year since 2008 and Jane Russell was a finalist for Entrepreneur of the Year at the 2010 London Business Awards.

Appointed head of Lexus Edgware Road in 2007, Mackinnon led the business’ transformation from satellite outlet to the UK’s flagship Lexus centre in 2008. The centre has consistently been one of the top performing in the Lexus network and benefited from a number of hugely successful and high profile partnerships including Middlesex Country Cricket Club, the Shooting Stars charity and Amy Winehouse Foundation. Mackinnon began her career as a fleet administrator before moving into sales and becoming sales manager for a Toyota franchise.

As local managing director, Collis is responsible for the operation of the London-based retail business, a wholly owned subsidiary of Toyota Tsusho Corporation, Japan, with a turnover of £150 million, employing 360 people and currently number 60 in the AM100.

Collis originally joined the group as chief operating officer in 2006 and previously held a series of high profile roles for manufacturers including group aftersales director for Fiat UK and spent 12 years as a general manager in aftersales for the Toyota brand.

Heading up Ridgeway Group, currently number 15 in the AM top 100, for almost a decade, having first joined in 1998 as its financial controller and becoming financial director and brand director in 2000, O’Hanlon was Grant Thornton’s motor retail manager. Employing over 1,200 staff across Oxfordshire, Berkshire, Hampshire, West Sussex, Wiltshire and Dorset, Ridgeway launched with a Volkswagen and Audi showroom in Newbury and a Volkswagen dealership in Wantage in 1997.

Tickets are available to dealers and manufacturers, with a limited number of supplier tickets on sale.

AM and IMI People Conference 2015 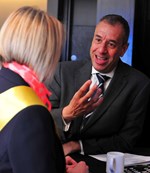