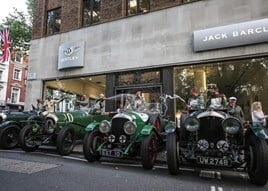 The Number 10 car returned to Le Mans for the first time in 91 years at this year’s Le Mans Classic, and HR Owen marked the occasion with a champagne showered show of vintage British sports cars.

As many as 19 vintage Bentleys and more than 200 guests turned up to mark the occasion, with the stunning cars parading around Berkeley Square, much as the original Bentley boys did back in the cars’ heyday.

The five racing cars then lined up outside the front of Jack Barclay for a triumphant photoshoot.

The Number 10 car was prepared for and raced at this year’s Le Mans Classic by the expert team at William Medcalf Vintage Bentley, who have looked after the car for several years.

William Medcalf said: “The Number 10 car holds a special place in history, and it was a privilege to be able to take it back to the place where it made its racing debut more than 90 years ago.

“This year’s race proved much more successful and was an epic experience, which enjoyable and entertaining for all concerned.

“We aimed to make the trip as authentic as possible, and returning to London to a fantastic welcome party kept this going right to the last moment.”

The William Medcalf Vintage Bentley team’s dedication to authenticity saw the team behind the Number 10 car approach the Le Mans Classic in the same way as the team did when it last made the trip in 1925.

They drove the car down through France, competed and then drove home again in the car, heading to Jack Barclay Bentley after the finish, going via William Medcalf Vintage Bentley’s headquarters in Liss, West Sussex.

There, the cars that drove from Le Mans met up with several other vintage Bentleys to form a 12-strong convoy that made the trip to London.

Number 10 had a more successful time at Le Mans in 2016 than it did in its previous race 91 years previously. In 1925, a last-minute change of the rules required the cars to run with their roofs up for the first part of the race.

This time around, it managed an indexed finishing position of sixth out of 64 cars in its class, hitting a top speed of 91mph down the Mulsanne Straight in the process.