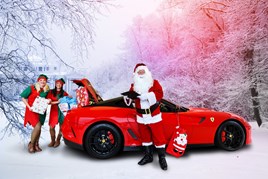 Staff from JCT600’s Leeds Porsche centre slipped into Santa-inspired outfits to raise funds for The Princes Trust by creating their own charity calendar.

As part of the top AM100 group’s four-year patronage of the charity, a team from Porsche Centre Leeds styled themselves in seasonal attire for a photo shoot which came as part of a challenge to raise £10,000 for the youth charity as part of its nationwide Million Makers competition.

JCT600’s In Your Dreams 2017 calendar stars some of the family motor company’s most eye-catching cars as well as colleagues in suitably seasonal poses.

The stylish photos range from colleagues ‘proposing’ to one another over a beautiful Porsche 918 Spyder for the February Valentine’s photo to the entire JCT600 board of directors in their scariest Halloween garb with a Bentley GT Speed for the October page.

Jo Thompson, brand financial controller for JCT600 and one of the Million Makers team at Porsche Centre Leeds, said: “Every year we take part in JCT600’s charity fundraising activities and we wanted to do our bit for The Prince’s Trust in the first year that the company has been a patron.

“To be honest, having come up with the idea of a JCT600 calendar, turning this into reality has been a bigger task than we expected.

“Within just a couple of months, we had to arrange for all of the photos to be taken, oversee the editing, find sponsors and arrange printing.

“We’re now busy marketing the calendars and the project seems to be going well although we only have until mid-February to reach our £10,000 target.”

The Prince’s Trust’s Million Makers competition invites teams of employees from across the UK to come up with a fundraising business idea which they pitch to a Dragon’s Den-style panel of judges from The Prince’s Trust and from their own company.

The selected teams are then given £1,500 seed funding and challenged to raise at least £10,000 within a six-month period.

In February, the winning team in each region will go forward to the national competition with the UK winner announced in March – the overall aim is for all the teams to collectively raise a grand total of £1m to transform the lives of disadvantaged young people across the country.