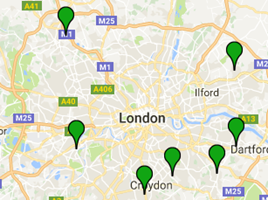 Mazda is currently looking at whether it can introduce its MyWay test drive concept across other major cities in the UK to help crack cold territories where it has low or no dealer representation.

MyWay has been running since July 2015 across 22 London boroughs to help the Japanese brand build up a market share across the centre of the capital – an open point for 15 years – but could now be destined for other UK cities.

Speaking to AM about the concept, which takes the test drive experience to a location of a customer's choice, Simon Culley, Mazda UK strategic retail project manager, said: “We put this concept together because we thought there must be a better way to build representation in these high cost central locations.

"This wasn’t put together to replace dealers, we needed a way to work with them and come up with an alternative representation plan.”

While Culley would not confirm which cities MyWay could launch in next, he did say the brand is looking at major cities where the cost of having a bricks and mortar location is high.

AMi’s franchise location map shows Birmingham, Edinburgh and Manchester as potential locations where Mazda does not have representation in the city centre.

Culley is feeding back his findings on the pilot into Mazda Europe where the brand is running into the same problem.

MyWay in the UK links in with seven franchised dealer partners around the M25 who then complete sales, part-exchanges and servicing following test drives.

Culley said: “We did a lot of research before launching last summer and the feedback we got was that customers in London needed us to come to them with a concierge service. They couldn’t get across London and out to the dealers surrounding or just inside the M25.”

Brand champions and the test drive

They are managed by a team of three and the MyWay team are all based remotely across the 22 London boroughs.

The team speaks a total of 18 languages, a skill that can come in handy when communicating with a wide range of customers in the cultural melting pot of London.

Mazda received over 1,000 applicants for the 10 brand champion roles and those that joined the team came down to those that gave the best customer service experience. The majority do not have previous automotive retail industry experience.

The has been no staff turnover since the project started in July last year and the brand champions are paid a flat monthly salary.

A central location of demonstrator stock is held in Purfleet, near Mazda’s UK head office in Dartford. If MyWay doesn’t have a demo in stock that suits what a customer is looking for, the team will then look to source it from one of the seven dealers involved with the project.

Customers can book a test drive using the mazdamyway.co.uk website. Customers select a model, a date and whether they will be free in the morning or evening. They then fill out their contact information and the location they would like to be picked up from for the test drive.

The MyWay team then contact the customer in the way they want (phone or email) to confirm a time slot on the date requested.

The vast majority of tests drives are carried out at customers’ homes and there is no set time for how long they last. The brand champions will spend as long as the customer likes, but on average they last for just over an hour.

Dealers are then invited to contact the customer with their offer for a price on the new car and the part-exchange. Customers are left to choose which dealer they want to go for.

Culley said: “We don’t get involved with pricing, that’s left to the dealer and customer to decide.”

Brand champions will accompany customers to the physical dealership if that’s something they want to do.

Each brand champion has a tablet they can use to take customers through the configuration and finance process. The MyWay team will also work with customers that have bought to collect and deliver vehicles for servicing at the seven dealerships after their purchase.

Culley was not able to share sales conversion statistics for MyWay since launch but he did say it has now completed over 1,000 test drives and sales are “in the hundreds”.

He said: “It’s got some traction and the real battle ground is market share in that central London area. If you look at where we were before and where we are now our retail share has increased.

“It hasn’t been easy, it was essentially a frozen territory for Mazda and we’ve been chipping away at it with this concept.”

Culley said that MyWay is still being treated as a pilot 15 months in.

He said: “MyWay is being used as an alternative retail concept and I maintain that it’s not there to replace traditional dealers.

“If Mazda reaches its goals to build the brand and market share to a point where we could have support a traditional dealership in those central locations I think we would still do that.

“We will also be taking what we have learnt on this pilot and filtering that into the wider retail experience in the network.”