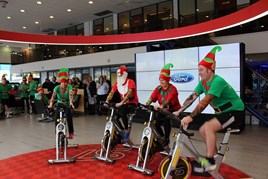 A team of nine colleagues, led by Castleford-based operations director John Leeman, were put through their paces in a gruelling spin class and succeeded in raising £1,300 for the charity.

Julia Greenhough, head of marketing at TrustFord, said: “The spin challenge was another fun way to raise crucial funds for Cancer Research UK, which performs such vital work.  “We are always looking for new ways to support this amazing charity, and we look forward continuing to do so as we move in to 2017.”

Along with automotive charity, BEN, Cancer Research UK is TrustFord’s official charity partner and the dealership group regularly takes part in a variety of events across its network of 65 sites to raise much needed funds for both organisations.

The Spin Challenge follows earlier fundraising in November, where four TrustFord colleagues braved the cold and were submerged into a Ford Ranger full of icy water at the Dagenham dealership, raising £1,255.

In addition, the third annual TrustFord One Penny auction, held on eBay in December, saw a brand new Ford Transit Courier (1.5 Duratorq TDCi 75ps) put under the hammer with a starting price of just 1p. The auction raised a fantastic £7,000, all of which went straight to Cancer Research UK.