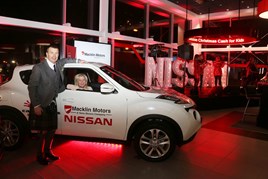 Macklin Motors celebrated the partnership at the opening of its new £5 million dealership site on Port Dundas Road.

The evening featured a cooking masterclass from celebrity chef Tom Kitchin and a visit from Olympic legend Sir Chris Hoy, who attended in his role as Nissan brand ambassador.

A brand new Nissan Juke, donated by Nissan, was auctioned off to raise money for the charity among a host of other items.

Robert Auld, general manager of Macklin Motors Nissan Glasgow Central, said: “We at Macklin Motors think that businesses have a responsibility to support those less fortunate in the communities in which they operate.

“Radio Clyde Cash for Kids has helped two million children since 1980. We’re looking forward to working with the charity throughout 2017 to have a positive effect on vulnerable young people across Glasgow and the west of Scotland.”