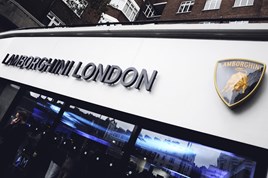 Lamborghini has recognised HR Owen’s London showroom as the most successful in its global network and the group’s trio of dealerships as the best in its business.

The Lamborghini London showroom in South Kensington was responsible for the most global car sales in 2016, making it the number Lamborghini dealership in the world.

As well as the famous London showroom, HR Owen has Lamborghini dealerships in Pangbourne (Berkshire) and Lamborghini Manchester and their combined success added to London’s results to put the group on top of the global dealer group charts for Lamborghini.

Responding to the news that HR Owen boasts the accolade of being the number individual Lamborghini dealer worldwide and is the number dealer group overall, Rupesh Jethwa, HR Owen Lamborghini brand director, said: “It’s been an outstanding year for HR.Owen Lamborghini. Our results have been fantastic, which is testament to the amazing cars we sell, the hard work of the team and their exceptional understanding of the customer.

“We’re very much looking forward to even more success in 2017, with the launch of the Aventador S sure to keep us busy throughout the year.”

HR Owen Lamborghini has become a destination of choice for petrolheads keen to get a glimpse of the Italian brand’s rarest supercars.

The Veneno’s presence at Lamborghini London hit headlines around the globe.

It was the very first Veneno to be featured in a main dealership in the UK, having only previously been on public display at the Lamborghini Museum inSant'Agata Bolognese, Italy, and at high-profile motor shows around the world.