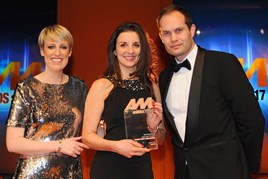 In a closely fought category, with some of the most heated debates among judges, Arnold Clark’s  continuous innovation and its strengthening financial performance saw it take the crown.

Its trading performance leapt in 2013 and 2014, with the latter the most successful in Arnold Clark’s 60 years of trading. The upward trend continued in 2015, with a steady rise in 2016’s interim period across all departments. Organic growth has been consistent with a volume brand bias with small premium brand exposure.

Innovation continues to be at the heart of the business. In 2016, the group – which has 200 dealerships and 24 new car sale franchises – created a UK-wide finance campaign, Best Deal Guarantee, to promote its low rates. It offers customers double the difference if they find a cheaper deal elsewhere.

With the help of a digital product development department of 70 developers and technicians, Arnold Clark is improving customer experience online as well as in-store. It has incorporated a ‘test drive’ button on its website, alerting staff at one of three branches to prepare the car for a test drive.

League tables of photographs taken by staff ensure high standards, while the use of an app means cars are captured and images uploaded as soon as they arrive at a site. Clicking an image presents a 360-degree view of the car. More than 40 centres feature one-minute car videos.

In winter 2016, a What Will You Buy campaign offered customers a £20 shopping voucher with each service, increasing manufacturer services by 20%. A similar summer campaign saw customer invoice values rise by 3%. In September, Arnold Clark launched a delivery centre in England, providing eight ‘hubs’ that allow it to offer a click-and-collect buying service.

“It continues to impress with a determination to evolve. It has the processes, size and scope akin to a PLC, but a down-to-earth, inclusive attitude to its people,” the judges concluded.