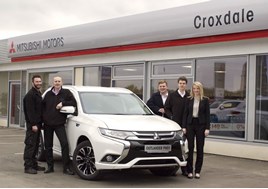 Croxdale Group has become the latest addition to Mitsubishi UK’s dealer network, with a seven-car showroom in County Durham.

Croxdale Mitsubishi, located on the A167 around four miles outside Durham city centre, also features a 400sq-m workshop that housing eight bays, an MOT bay and diagnostic lane.

An experienced team of eight — including four newcomers to the successful Croxdale group — is managing the site.

The addition of Mitsubishi sees the Croxdale group double add a new manufacturer partner to its existing Citroen and Subaru franchises.

Managing director, Kevin Parkinson, said: “Mitsubishi has a fantastic reputation for producing quality vehicles, and it’s something we’re very excited to be a part of.

“From the Mirage right up to the award-winning L200, it’s a brand which is exciting and becoming increasingly popular here in the North East.”

It took four months for Croxdale Group to refurbish its showroom ready for Mitsubishi’s arrival and the response has been overwhelmingly positive.

Parkinson added: “Our opening weekend was absolutely fantastic — busy from start to finish with people coming to have a look at the brand-new site, experience the Mitsubishi range and making aftersales bookings.

“General awareness is building that Croxdale is the new name for Mitsubishi in the North East. The local community are delighted to now have a local Mitsubishi dealer on their doorstep in Durham.”

Lance Bradley, managing director of Mitsubishi Motors in the UK, said: “I’m delighted that Croxdale Group has chosen to grow with Mitsubishi at what is a very exciting time for the brand. With their expertise, and the group already having an excellent reputation in the area, we know that the region’s new and existing Mitsubishi owners are in very safe hands.”

Dealers and Mitsubishi are getting their act together

Dealers and Mitsubishi are getting their act together