HR Owen gets Schumacher F1 car purchase 'over the line' 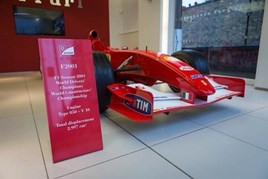 HR Owen is all set to put a replica of Michael Schumacher’s 2001 season-dominating F1 car onto the tarmac of London after getting the purchase of the iconic racer “over the line”.

The Ferrari retailer will display the iconic racing car – one of Ferrari first-ever replicas – outside its South Kensington dealership between midday and 3pm tomorrow.

It was originally used throughout the 2001 Formula One season as an event and pit show car as Schumacher dominated the sport, winning nine races and securing the drivers’ championship a massive 58 points ahead of nearest competitor, David Coulthard.

James Champion, HR Owen’s Ferrari brand director, said: “We’re incredibly excited to take the Schumacher replica car back out on the road and give enthusiasts the chance to enjoy it first-hand.

“Purchasing the car took a long time to get over the line, but having witnessed something special with Schumacher behind the wheel, it was something we had to be a part of.

“Now we can’t wait to share it with fans outside our showroom and give them a glimpse into Ferrari F1 history.”

The replica from Schumacher’s heyday is not the only F1 model that HR Owen Ferrari has in its armoury.

The showroom is also home to a replica from the 2015 Formula One season.

Sebastian Vettel’s debut year for the marque alongside Kimi Räikkönen, 2015 saw Ferrari come second in the constructors’ championship and cement its position as a Formula One superpower.

HR Owen Ferrari was awarded the replica show model after being crowned 2015’s Global Dealer of the Year.