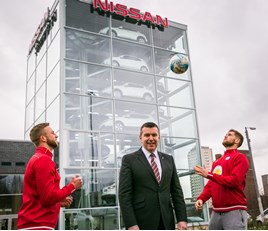 The team holds a special place in the heart of Robert Auldas he is the son of Robert ‘Bertie’ Auld, who was Partick Thistle’s manager for six years from 1974 to 1980.

He said: “Macklin Motors is always keen to show its support for the local community and local sport in particular.

“Partick Thistle is my second team because of the connection with my father, but I think most people in Glasgow have a soft spot for them, and, as they’re practically on our doorstep, we wanted to give them our backing.

“I think we can actually see their home ground, Firhill Stadium, from the top of our glass tower.”

The dealership will now sponsor Partick Thistle as part of its new sponsorship agreement.

The landmark eight-storey dealership has provided the team with four vehicles, a Nissan Juke, an X-Trail and two Qashqais, for use by the manager, assistant manager, managing director and commercial manager.

Ian Maxwell, managing director at Partick Thistle, said: “We’re very pleased to have the backing of Macklin Motors. The site has a prominent place close to the stadium and does a lot of work with organisations in the city, so it’s great to have partnered with the dealership.”