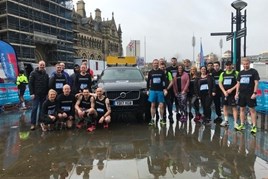 Clive Brook Volvo supported Epilepsy Action’s Bradford 10k by providing the charity run with a new XC90 T8 to lead the 1,700+ runners that took part in the event.

Clive Brook Volvo managing director, Clive Brook, said: “As a local business, it’s important for us to be able to give something back to the community through sponsorship to help raise awareness for fantastic events like Epilepsy Action’s Bradford 10k.

“The organisation and support on the day was incredible – the wind and rain didn’t even dampen the Clive Brook team’s spirit, with a couple of our staff members achieving sub-40 minute race times.”

As the UK’s leading epilepsy organisation, Epilepsy Action’ exists to improve the lives of those affected by the condition in the UK.

Epilepsy can affect anyone at any age and over 50 million people have the condition globally.

Brook said: “We have a strong focus on staff welfare at Clive Brook and this was the first of a number of events the team have been working on to improve their general wellbeing – it’s also a huge boost for team morale inside and outside of the dealerships.

“It was great to see the XC90 taking pride of place at the starting line and also I’m proud to say our team supported an overall £42,700 raised by the event, making it an amazing day for all involved.”

Clive Brrok has Volvo sites in Bradford and Huddersfield, having added the former Harratts Huddersfield franchise to its existing Bradford site in April 2015, and recently celebrated a turnover of above £40 million after selling over 1,350 cars during 2016.