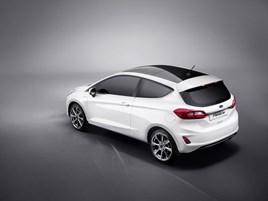 Ford will roll-out the Vignale premium range throughout its network this year as part of plans to boost sales following the launch of a Fiesta hatchback to the line-up.

All 466 Ford retail sites could potentially stock the Vignale model after the decision was taken to expand the Vignale offering after the announcement that the new entry-level to the range was made in December.

A Ford spokesman told AM that the manufacturer told AM that it expects 10% of annual Fiesta sales – currently around 130,000 cars – to be accounted for by the Fiesta Vignale, which starts at £19,345.

Asked what the effect would be on Vignale sales more generally, he added: “They will increase for sure, in-line with Fiesta being sold 76% to retail customers.

“To date Vignales have all been Mondeo, S-Max, Kuga and Edge. S-Max and Kuga have high Titanium mixes (70 to 80%), prompting the need for these customers – retail and fleet – to have a higher specification model available to move up to.

“Titanium is already chosen by over 25% of Fiesta drivers”

The Vignale range was initially launched in 2015 and rolled out across the emerging FordStore network, with premium lounges and defined areas set aside for the retail of the premium line-up, which initially featured Mondeo alone.

There are currently 70 FordStores in the network.

Dealerships now taking on the Vignale brand will not, necessarily, be required to invest in any CI changes.

The spokesman told AM: “They are required to run Vignale demonstrators and courtesy cars as required (Vignale customers get like-for-like loan cars).

“Sales people handling Vignale customers are Vignale trained and, where possible, Vignale lounge furniture is accommodated. This depends on space available – FordStores were designed with Vignale in mind, the addition for the rest of the network has to be displayed within existing real estate.”

Among the specifications on the forthcoming Fiesta Vignale will be black ruby leather, heated seats and panoramic roof, as well as 17-inch alloys and unique body styling and grille.

Commenting on the introduction of the new range-topper Ford of Britain boss, Andy Barratt, said: “Ford’s 40-year reign of the UK car market began in 1976 when the Fiesta was first launched, since then Fiesta has been firmly established as part of the fabric of Britain – and remained at the top of the sales charts for the last eight years.

“With so many new Fiesta faces coming this year, including B&O PLAY Editions for music lovers and the luxurious Vignale execution, it’s set to stay at number one.”

Ford aims to add premium polish with the Vignale sub-brand

Ford aims to add premium polish with the Vignale sub-brand