A Peterborough Kia dealer, a Shropshire Honda dealer and an independent in the East Midlands have come top in a poll of the UK’s 1,000 best dealerships.

Boongate Kia, JT Hughes Honda and Twells in Billinghay got an equal top score of 9.4 out of 10.

In the lower echelons of the countdown are centres operated by Bristol Street Motors (Birmingham), Lookers (Leeds), Evans Halshaw (Gateshead and Leeds) and Arnold Clark (Edinburgh and Glasgow) with scores of 7.3 and 7.4.

​Brian Walters, research and insight director at Driver Power, said: “Consumers want to know more than just the best new and used cars to own, they want to know the best dealers in their area to buy and service them.

“With over 16,000 new and used car dealers in the UK and Republic of Ireland, identifying the top dealers was no small task.”

Driver Power worked with Statista, which operates one of the largest statistics portals in the world, to find the top 1,000 best car dealers in the UK and Republic of Ireland.

Consumers were asked to rate the dealers with which they have experience on factors such as the demeanor of salespeople, the ability to negotiate a good price, the quality of the after-sales service, and the likelihood to recommend to a friend or family member.

The peer-to-peer survey identified which car dealers (other than themselves) these experts would most recommend to their family and friends.

A dealer’s scores from both surveys were then combined to create an overall score on which the top dealers were identified.

Thomas Clark, from Statista, said: “This ranking serves as a beacon for consumers who want to quickly find out where they can expect the best advice and service while looking for a car”

“The new ranking also pays tribute to the fact that getting the best deal for your personal or professional transportation has become a lot more complex in recent years: once upon a time it was about a single-act purchase.

“Now dealers also provide financing and insurance services. This drastic change in demand and the complexity of the market with the addition of hybrids, e-cars and car-sharing, dealers are expected to help consumers in every step of the car purchase process. Forward-looking car dealers understand these trends – and act service their clients accordingly.” 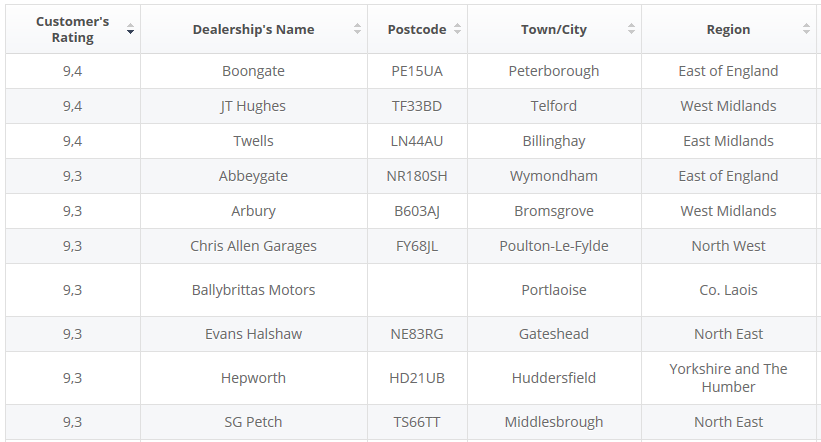