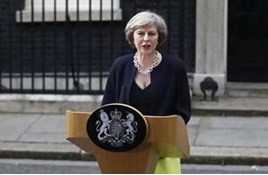 Retailers and suppliers across the automotive sector have expressed their concern over a continued period of uncertainty after Theresa May’s bid for a stronger mandate backfired in last week's general election.

As the BBC reported that a business confidence had sunk "through the floor" – a snap poll of 700 members of the Institute of Directors revealing a dramatic drop in confidence following the hung parliament – key figures from the automotive sector were keen to see some kind of stability return.

In the hours after Friday morning’s general election result the pound was changing hands at around $1.2738 against the dollar, having fallen around 2% with exit poll predictions of a hung parliament, but showed signs of steadying today.

Sue Robinson, director of the NFDA, expressed here desire for the return of more widely-felt stability. She said: “Following the unexpected results of the 2017 General Election, it is vital that a stable environment is restored as soon as possible.

“The NFDA will be monitoring the ongoing developments closely and will continue to engage with the Government to build new relationships and solidify existing ones.”

Weeks after he told AM that he thought that the general election could “bring about clarity and a mandate that will allow the government to bring about Brexit and the related changes to legislation that need to happen”, Lavery said: "UK consumers and businesses need some certainty. We’re looking at what could be potentially difficult negotiations in Europe or what could be sensible talks. It’s not in our interest to upset our EU allies.

“It’s unfortunate that on the face of it the democratic mandate has changed. The quicker things are concluded, the better.”

Steve Nash, chief executive at the IMI, said that the election results had revealed “the true political divide across the UK”.

He added: “The motor industry faces many unanswered questions following the election including the ongoing diesel debate, fuel duty, road tax – plus the government’s plans to secure a Brexit deal that will benefit the UK’s economy and ensure businesses can operate effectively.

The government also face added pressure to negotiate Brexit deals that will benefit the automotive sector, this includes the serious impact the existing skills shortage is having on the industry with people being reluctant to work in automotive.

“With more young people choosing to vote than ever before, it is time government paid greater attention to supporting the future of these people – after all their ability, skills and attitude will dictate the real future of the country.”

CBI director-general, Carolyn Fairbairn, said: “The next Government needs to deliver an open, competitive and fair post-Brexit economy that works for everyone across all our nations and regions.

“This can only be achieved if the next government doesn’t put the brakes on business, remains open to the world and sets out a pro-enterprise vision.”