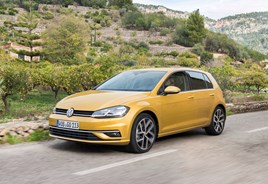 Volkswagen is celebrating Golf’s recognition as Britain’s best-selling car with limited time offers in a bid to further boost sales.

In June of this year the SMMT revealed Volkswagen Golf as the best seller for the month, with 8,808 units sold, placing the popular hatchback third on it’s year-to-date list with 36,703 registrations in total.

To boost these figures further, the manufacturer has rolled out exclusive offers at participating retailers.

Until July 24, customers can benefit from a £1,500 deposit contribution at 4.9% APR representative (when opting for a Volkswagen Financial Services’ Solutions personal contract plan on their new Golf).

In addition, the car’s first two services are included at no extra cost.

The launch of the updated Golf earlier this year saw the debut of the turbocharged petrol 1.5 TSI Evo powerplant.

The four-cylinder engine generates 150PS and features Active Cylinder Management (ACT) to reduce the number of cylinders employed at a cruise to reduce fuel consumption.

Last year the Golf accounted for one in three new Volkswagens sold in the UK, with almost 73,000 registrations.

Emerging from Volkswagen factories around the globe at an average pace of one every 40 seconds for the last 43 years, global sales of the Golf now exceed 33 million since its launch more than four decades ago (1974), more than two million of which are to UK buyers.

The new offer applies to all Golf hatchback (e-Golf excluded) and Estate models, including the dynamic range of Performance Golfs: the GTD, GTI, GTI Performance, R and the hybrid GTE and GTE Advance. It excludes the e-Golf and Golf SV.