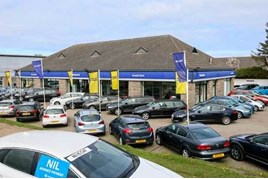 Arnold Clark will demolish a former Lidl supermarket to create a new Volvo facility in Aberdeen if planning officials give its plans the go-ahead.

Proposals for a replacement to Arnold Clark’s existing Aberdeen Volvo facility, which is nearby on Wellington Road, Torry, come as part of a £1.5 billion nationwide investment to transform the image of the AM100’s fourth-placed group, Aberdeen’s Evening Express newspaper reported.

The proposed site is just yards from the old Arnold Clark Service Centre on Girdleness Road, which was destroyed by fire in 2015.

Aberdeen City Council’s councillor for the area, Alan Donnelly, told the Evening Express “any economic development is welcome in Torry”.

He added: “If they do manage to get the change of use it would be beneficial for the community.

“All in all, it’s excellent news that people are looking towards the future.

“It’s all part of the economic wellbeing and redevelopment of Torry.”