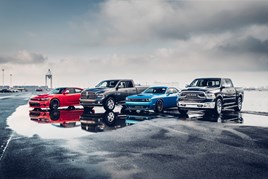 AEC (Auto Export Corporation) is searching for potential UK dealers for Dodge and Ram vehicles following its appointment as an official importer and general distributor of the US brands.

With only one dealer partner in the UK currectly, AEC is seeking to recruit new sites for Dodge and Ram sales and service and will ready dealers for implimentation of a full Dodge and Ram corporate identity, service certification and technical training.

Headquartered in Canada, AEC is a long-standing partner for the FCA Group (Fiat Chrysler Automobiles) in Europe, agreeing its first contract with Chrysler in 2011, and currently has a growing network of over 130 dealer partners on the continent.

Since 2011 it has developed its dealer network across the continent, notably in Germany where it now has 40 retail partners.

AEC maintains an inventory of vehicles in Antwerp, Belgium, and has its own engineering and research department to ensure homologation and conversions to European standards.

This network can access Dodge and Ram-series vehicles such as the Charger, Challenger, Durango and Ram 1500, as well as MOPAR parts.