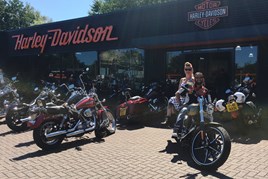 Jennings Harley-Davidson entertained local bikers with a true taste of America when it celebrated a successful first year at its Gateshead franchise site.

Staff at the group’s Ellison Road dealership served up all-American delights from SmokieDokie’s food van, refreshments by Manhua Cha Bubble and enjoyed the rockabilly sounds of Fickle Lilly, fronted by Charlotte Yanni, at the landmark celebration.

Sohail Khan, director of Jennings Motor Group, said: “We are delighted to have celebrated our first anniversary.

“The day was a phenomenal success with staff, customers, Harley-Davidson fans and members of the H.O.G Geordie Chapter enjoying a host of entertainment, food and refreshments from local talents.

“We are already looking forward to future anniversary celebrations as we continue to successfully grow and develop the Harley-Davidson product range and services in the North East.”

Jennings Harley-Davidson sells both new and quality used Harley Davidson motorcycles, in addition to offering a range of aftersales facilities, including service and Harley-Davidson parts and Accessories.