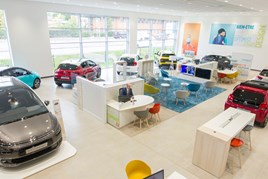 Robins and Day has officially opened a new flagship tri-brand showroom in Manchester after adding DS and Citroen dealerships to its existing Peugeot site in Manchester.

The 2.25-acre site, at the end of the M602, has undergone a major £3m redevelopment to add the two brands in a three-showroom facility which features a 17-bay workshop, supported by an off-site PDI centre and parts hub.

The PSA Group-owned retail group achieved over 6,500 Peugeot sales from the site in 2016, with an additional 2,000 units sold from the previous Citroën site.

Paul Keaveney, Robins and Day regional operations manager and former general manager of the site, said: “Peugeot have a long history in the city, with Tom Garners having opened on Deansgate right back in 1908 – giving this site great heritage.”

The site's introduction to the Robins and Day network comes just two months after it added a new DS Automobiles store in Manchester, billing it as the “largest dedicated DS store in the North West”.

The store, on Windsor Street, Salford, has room to display up to six vehicles and customers can enjoy bespoke leather seating, air-conditioning and a DS scent diffuser, according to a statement issued by the PSA Group-owned group.

Peugeot UK chief executive James Weston said: “This our biggest development yet and a real flagship within the group, and comes after we launched our new Liverpool site last week.

“And it doesn’t stop there, as we have three other sites currently in redevelopment, and four others due to start this year.”

Weston added: “Robins and Day has a clear vision and clear values both of which interlink with the passion and belief of our teams.

“I am confident that the contribution from the employees at Robins and Day Manchester will only strengthen in this fantastic new facility.”