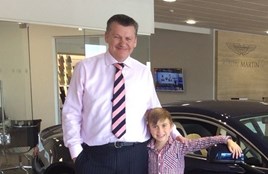 Cambria Automobiles is backing a campaign to find a cure for Duchenne Muscular Dystrophy after inviting a young sufferer to its Grange Aston Martin dealership in Birmingham.

Joining Jack is a Wigan-based charity founded by Andy and Alex Johnson after their son Jack was diagnosed with the terminal condition, a ravaging muscle-wasting disease which usually confines sufferers to a wheelchair by the age of 12 and ultimately leads to paralysis and breathing difficulties. The average life expectancy of a sufferer is 26.

Cambria chief executive Mark Lavery and finance director James Mullins met Jack and his parents to discuss how the group could help with their mobility needs and support their cause, while Jack went on a ride-along in a DB11 with transaction manager Dean Sprag

Lavery said: “I am delighted to announce that Cambria is also Joining Jack by providing a car that can accommodate Jack’s wheelchair.

“Andy and Alex are doing everything they can to help Jack and other children like him, and we are thrilled to be able to support them and the charity in their quest.”

Jack’s father Andy is a former rugby league professional and through his sporting connections the charity has ambassadors including Jason Robinson, Owen Farrell and Danny Orr.