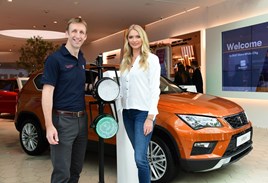 Cars in shopping malls aren’t such a surprising sight these days: indeed, Westfield in west London, where Seat has just opened its latest store, is also home to Bentley, Tesla, DS and Infiniti.

However, many consumers still think that the cars they see at a shopping centre are just for promotional purposes and don’t realise that, actually, they can walk into a store and come away with a new motor.

At the same time, these in-mall stores – especially in and around the capital – are also enabling manufacturers to build a presence in metropolitan areas, which have previously proven difficult to gain a foothold in, thanks in part to higher (often prohibitively) real estate costs.

The new Seat store at Westfield is a perfect example of this new way of reaching city-dwelling car buyers. Working with Group 1 Automotive, Seat identified Westfield as the ideal location to reach new consumers.

Seat UK director Richard Harrison said: “We were looking at how we could come into London. It was a very pragmatic choice: to have a traditional dealership, with the scale we need, just doesn’t make commercial sense. So we decided to do something different and we came up with the idea of going to where the customers are.

“London’s not the easiest place to move around, either, so coming to somewhere where 27 million people come every year is a key part of that.

"Now we’re here, we’ve found that it’s a great opportunity, because we see more people through this store in a week than all the network sees.

“Instead of listening to what people who write spreadsheets or PowerPoint presentations, if you actually talk to customers on a far more regular basis, learn about what they really want, we can take that learning, and gradually adapt our processes and our business according to that.”

And Seat is learning a great deal about what modern consumers want, according to Ben Price from Group 1, who is responsible for the running of Westfield store and a store in the Intu Lakeside Shopping Centre in Essex, which opened in September 2016.

So, for example, the store deals with a customer who represents a passing trade that a traditional franchised dealership will see very little of these days.

Price said: “We see a much larger funnel, in terms of the general walk-in enquiries – which is huge compared to a standard dealership – and it’s predominantly people who walk past and then just wander in.

“There’s a lot of people out there who’ve experienced the old-school motor trade and they’re wary. But when they come in and start to touch and feel and interact with the displays, they quickly realise this is a different environment.”

Group 1 managing director Darren Guiver also described how the store adapts to the retail environment around it. He said: “It’s the same approach as you would get from any other retailer in this kind of space.

“You wouldn’t negotiate over a suit in the Hugo Boss shop around the corner, for example, and that’s how we are here.

“If we behaved in a traditional dealership manner, we would immediately alienate customers, I think. So we are mirroring what our retail competition do. And it’s an effective way of doing things.”

The most common question that customers ask is about cost – which, as Price says, “is where the consumer is”.

But the ability to buy a car from stock and drive it away in seven days also comes as a pleasant surprise to many buyers.

“There’s still a perception that you order a car and it takes a while to come,” said Price.

“So in an environment where you buy a pair of jeans or trainers and you take them home and own them immediately, to come in and have a car in what is a relatively short period of time is quite exciting for them.”

As a concept, the shopping centre store is certainly working for Seat, if a year at Lakeside and the first month at Westfield are any indication.

Harrison said: “Just to give you an impression, Lakeside’s sales volume would put it in the upper quartile of our dealerships, by sales volume nationally.

“It's a small operation, but it’s generating a big operation’s output. That’s consistent with the amount of people that we see.”

The Westfield store is very much a solution to the specific challenges that the London market present, though, as Harrison was careful to point out: “We have some terrific dealers that do a great job around all of the other major cities. We have no need to talk to them about changing to a store model.”

Stores in shopping centres aren’t the answer to a changing automotive retail landscape, but if Seat’s experience is any guide, they certainly look as if they’re an answer.