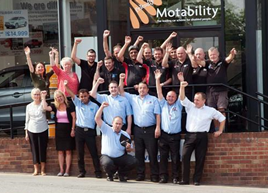 Luscombe Motors recorded a 24.5% rise in profit before tax and a 5.3% increase in turnover following a restructure which made the business “less reliant on the managing director”.

Managing director of the Hunslet-based operation, near Leeds, Robin Luscombe, said that he was “really pleased” with the positive set of results, which reflected strong demand for the two Japanese brands it represents.

In its published financial results, Luscombe also credited developments in the business’ management team, which had delivered “more resilience” and less reliance on Luscombe, for the positive results.

The statement said: “The team have managed to expand their responsibilities while at the same time improving financial performance.

“The company is pleased with the developments to date, which will provide long term security to the company and staff and has created career progression for those who wish to take it.”

Luscombe Motors’ move away from a reliance on its managing director comes three months after he launched a multi-million pound private investment fund to help entrepreneurs establish their own franchised car dealerships.

Research has shown that out of the new entrants to the sector in the last 15 years 92% were through manufacturer sponsored dealer programmes therefore highlighting the need for this fresh injection of blood.

Tempus has raised a multi-million pound fund which will be utilised to back a number of highly-regarded entrepreneurs over a three-year period.

Speaking to AM at last week’s Automotive Management Live expo event at the Birmingham NEC – where Luscombe Motors achieved AM Best Dealership to Work For status – Luscombe said that there had been “no shortage of applicants” for the scheme.

He said: “There have been in excess of 50 applications and we have had to take a close look at each and, in some cases, manage expectations.

“It might take some time for manufacturer deals to come to fruition and we have some very keen applicants. Overall, things are looking really positive, but we have a lot of work to do.”