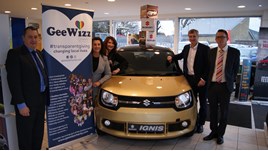 John Banks Group has announced that it will support the GeeWizz foundation as its charity of the year in 2018 - supporting terminally-ill children.

GeeWizz was formed to support children and young adults living with a life-threatening condition or disability. It also helps those affected by cancer (directly or indirectly) alongside funding cancer research, in particular Sarcoma.

The East Anglia motor group will hold a number of events across its seven dealerships in Suffolk and Cambridgeshire, involving both staff and customers.

John Banks’ chief executive, Melanie Banks-Browne, said: “I have known Gina Long MBE for many years and have seen the difference she has made to many families with her charity work in the area.

“Her and Andrew really dedicate themselves to making a difference. We also like the fact that GeeWizz prides itself on 100% transparent giving, where 91.5p out of every £1 donated or raised goes straight to changing the lives of local families.

"I am delighted that the John Banks Group can help with fundraising for this wonderful charity.

“John Banks have always supported many community projects with sponsorship and support across East Anglia and will continue to do so where possible.”

GeeWizz’s founder Gina Long MBE said: “Since GeeWizz was founded in December 2015, we have been wonderfully supported by our generous local community.

“This has allowed us to directly change so many local lives and really make a difference.

“I am truly grateful to Melanie Banks-Browne and the team at John Banks for their support throughout 2018. We look forward to supporting them every step of the way.”