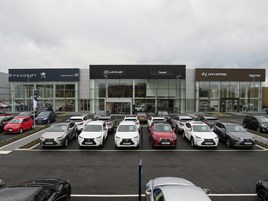 Motorline has started 2018 with the opening of a £14.5 million car dealership development at Gatwick, featuring Lexus, Hyundai and Peugeot showrooms.

The new facilities officially opened their doors to customers on February 5 and add to the AM100 group’s existing presence in the area where it had existing franchised outlets with Toyota, Volkswagen and Nissan businesses.

The state of the art freehold development in Fleming Way, Crawley, totals 3.2 acres and 75,000 square feet and is located in the centre of the Manor Royal Business Park.

The site was acquired and redeveloped by their property company GGT Estates and will be let to Motorline.

Canterbury-based Motorline now has a portfolio comprised of 55 sites across South East, South West and Midlands and a group turnover in 2018 budgeted to exceed £730m.

Commenting on the group’s latest development at Gatwick Motorline chairman, Glen Obee, said: “We have worked closely with our Lexus, Hyundai and Peugeot brand partners to ensure we deliver a combination of 100% brand separation whilst at the same time, making the site an attractive destination point for customers looking for an alternative solution and greater choice.

“We are delighted with the outcome which incorporates the very latest retail environment for each brand, the effect is simply stunning.”

Motorline’s new Gatwick dealership development brings the total number of dealerships operated by the group in the area to six with over 225 local employees.

The group said that the facility had created over 75 new jobs and Motorline anticipates selling approximately 3,000 new and used vehicles per year from the three new dealerships.

In 2017 Motorline opened four new build dealerships, with Nissan and Peugeot in Gillingham and Nissan and Skoda Dartford.

Those developments came alongside a string of acquisitions, which included acquisition of Hereford Hyundai from Stirling of Hereford, KAP Motor Group’s Ashford Nissan and Peugeot franchises, Newbury Nissan from Rowstock and Sytner’s Lexus franchise in Bristol.