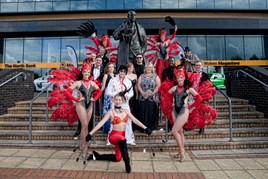 Jardine Motor Group’s Audi dealerships across the West Midlands are preparing to host their 5th annual charity ball in a bid to hit a £50,000 fund-raising target for a number of deserving causes.

Whizz Kidz, Legacy4Lucy and Promise Dreams will all benefit from the hard work of staff at the AM100 retail group’s Tamworth, Wolverhampton, Halesowen and Erdington dealerships when they host the Hollywood-themed event at Dunstall Racecourse on Saturday, June 9.

The group said that guests will be treated to the VIP red carpet treatment, an evening of live entertainment, casino tables, silent auctions and raffles.

Jardine’s Audi Division will also be giving away a golden ticket which will see one guest walk away with a money-can’t-buy prize.

Andy Davies, Audi brand director at Jardine Motors Group, said: “We are once again delighted to support Whizz Kidz, Legacy4Lucy and Promise Dreams and would like to thank our sponsors Three Pines Building and Vehicle Connections.

“We have already raised an amazing £36,000 for these deserving causes over the past four years and hope to reach our target of £50,000 during this year’s event.

“It’s going to be a night not to be missed, so we encourage anyone who would like to have an evening of all in aid of some great causes to book their tickets now.”

The Whizz Kidz charity is focused on transforming the lives of children with disabilities across the UK, supporting them to become confident and independent young adults by providing the vital equipment, support and life skills needed to reach their full potential.

Legacy4Lucy, meanwhile, was set up in memory of a young woman who lost her battle to breast cancer and aims to raise funds to help find a cure for breast cancer which kills 11,000 women in the UK annually.

Promise Dreams aims to make a real difference to children who are seriously or terminally ill.

Whether it be going on a holiday of a lifetime or meeting their celebrity heroes, the charity hopes to make them come true for the whole family in need.

In addition to the annual charity ball, which was last year held at Wolverhampton Wanderers’ Molineux Stadium (pictured), the group donates £25 for every Motability vehicle sold by one of their dealerships and offers work placement opportunities to young people with disabilities in a variety of roles.