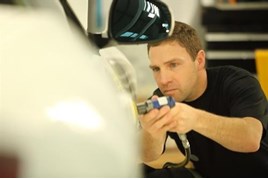 HR Owen announced that its bodyshop, branded Bodytechnics, has been granted official brand accreditation from Lamborghini.

As Lamborghini reportedly accounts for a “high percentage of vehicles” in Bodytechnics care, HR Owen said, it identified the need to be officially recognised by the manufacturer.

HR Owen’s group bodyshop manager Adam Thurman said: “This is another fantastic achievement for Bodytechnics and one we’re incredibly proud of. Lamborghini is a fundamental part of the HR Owen group and we are delighted to have received approval from the brand.”

The Slough-based bodyshop decided to work directly with the manufacturer to receive factory approval.

Bodytechnics technicians trained across Europe with Lamborghini experts to learn the intricacies of every model – ensuring their brand knowledge is “second to none”, covering models from across the history of the marque.

HR Owen has invested in tooling and equipment needed to fully assess and repair the supercars in-house, and now has Lamborghini’s full technical support.