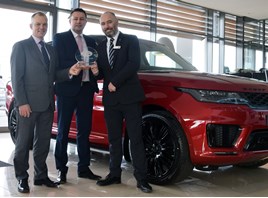 Land Rover has recognised the best dealerships from with its franchised retail network with the presentation of its annual awards.

The dealerships awards followed last year’s wins in the awards’ Retailer of the Year and Aftersales Retailer categories.

Swansway’s Valley Drive Land Rover facility, which has only been operating from its current site since 2015, will “treasure” its accolades, according to retail group director David Smyth.

He said: “I am so proud of our magnificent team at Stafford Land Rover, led by head of business, John Nimbley. They have achieved consistent excellence because that’s what’s needed to win the top award twice.

“To take the Sales Retailer of the Year award too is just fantastic and huge congratulations must also go to the sales team, led by general sales manager, Matt Knowles”.

Smyth added: “As a family business this recognition is something we genuinely treasure, it shows just how hard our team works to ensure our customers get tip-top service. Well done to everyone at Stafford Land Rover.”

The Charles Hurst Boucher Road dealership was singled out by Jaguar Land Rover UK for its skilled expertise and commitment to providing an exceptional customer experience to win its aftersales award.

The award comes at a key time in Charles Hurst Land Rover’s history as it approaches the final phase of the build of its brand new £8m Jaguar Land Rover showroom, which is expected to open in a matter of weeks.

“It was a great team effort and we couldn’t have done it without everyone involved, that includes our customer-focused service advisors, manufacturer trained technicians, service support advisors, parts advisors, valet parkers and drivers.

“A special mention also goes to our aftersales manager Glenn McCartney and parts manager David Cockfield who have supported their team effectively to lead them to this fantastic achievement.”

The best Volvo dealers in the UK collect carmaker awards

The best Volvo dealers in the UK collect carmaker awards 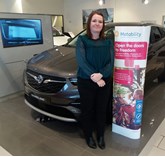