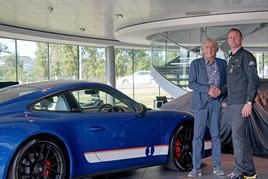 More than 200 people attended the event, which took place on May 22.

At the event he was handed to keys to his very own example, alongside one other customer who had pre-ordered the limited edition vehicle.

Tony Gatt, centre principal at Porsche Centre Portsmouth, said: “We were extremely privileged to have Derek join us. Over the course of his long and hugely successful career, his name has become inextricably linked to Porsche. It was a real honour to give him the keys to drive away his very own limited-edition car which celebrates his amazing achievements and the part he has played in making Porsche the most successful manufacturer to ever race at Le Mans.”

Guests had the opportunity to hear from Bell and to ask him questions in a Q&A led by Lee Sibley, editor of Total 911 Magazine.