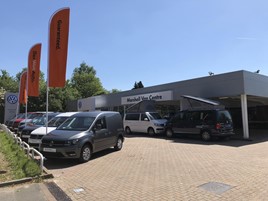 Volkswagen UK has recognised the contribution of its franchisees in the transformation of its Van Centres to create a network of ‘state-of-the-art’ commercial vehicle facilities.

The Agnew Volkswagen Van Centre in Newtonabbey, Northern Ireland, and Marshall Van Centre in Reading were highlighted for a “substantial investment in expanded facilities” and “makeover to deliver highest level of service to customers” among a series of investments in the network.

Volkswagen said that, in addition to the expansion of Inchcape’s Manchester Van Centre, which is now the biggest standalone Authorised Repairer of Volkswagen Commercial Vehicles in the country, several locations had been redeveloped as part of a network upgrade.

There are now 71 Volkswagen Van Centres and 25 additional Authorised Repairers across the UK.

Richard Blunden, national network development manager for Volkswagen Commercial Vehicles, said: “The recent improvements to our Van Centres show our commitment to delivering the highest level of service to our customers. We are the commercial vehicle professionals with facilities to match our expertise.

“These modern Van Centres and Authorised Repairers allow us to work with van operators to deliver exactly what they need thanks to state-of-the-art equipment, technology and workshops.”

The Lancaster Volkswagen Loughton Van Centre on Langston Rd, Loughton, has also undergone a sizeable redevelopment with work completed in May, Volkswagen said.

Upgrades include an overhaul of separate commercial and passenger vehicle showrooms and workshops, an introduction of an external ramp and new first floor parking.

Swansway Group’s Volkswagen Van Centre Wrexham, on Main Road, Rhosrobin, is also currently undergoing a makeover to fit out a larger workshop and is due to be completed soon.