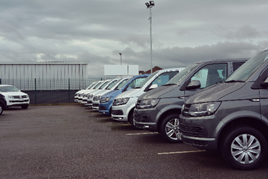 Swansway Garages has made Liverpool the home of the UK’s largest Volkswagen used van centre following the opening of its new commercial vehicles facility.

The Volkswagen Van Centre on Evans Road, Speke, has been part of the AM100 retail group since 2011 and the latest developments for the award-winning retailer has seen it grow to new proportions with the neighbouring used van facility.

The aim is for the new element to the commercial vehicles operation to retail 100 vans a month from the site which has its own five-strong sales team, plus its own team of valeters and technicians.

“This Used Van Centre represents a £1/2 million investment for Swansway. It sits right next door to the existing dealership, but stands alone in every aspect, with its own sales centre, workshop, valet bay and dedicated team.

“The vans are covered by the Volkswagen approved used van scheme, Das Welt Auto (DWA) and we’re aiming to give our used van customers a brilliant experience.”

Sales manager, Jon Gill, heads up a team of five specialist used car sales executives at the site. Gill said: “We’re very excited by the launch of this specialist used van site and I’m confident that it’ll help van drivers in the region. Now it’s fully up and running, we expect it to be popular for both servicing and sales.”

Swansway’s brace of appointments at Fiat and Audi franchises

Swansway’s brace of appointments at Fiat and Audi franchises