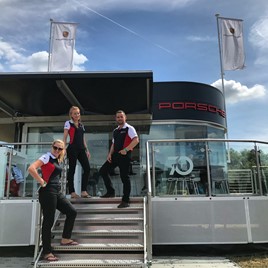 Inchcape’s Porsche Centre Bournemouth was the only franchised car retailer to exhibit at the annual Beaulieu Supercar Weekend (August 4-5).

Alongside a full range of new Porsche models, the dealership operation showcased its very own race-winning Restoracing Boxster.

More than 10,000 supercar enthusiasts attended the event at Beaulieu National Motor Museum, in Hampshire’s New Forest National Park, which brought together more than 900 of the world’s most exclusive and desirable cars.

Oliver Sanderson, sales executive at Porsche Centre Bournemouth, said: “It was a really successful event and a great opportunity to meet even more Porsche owners and enthusiasts. This was the first time we have taken part, but I hope we will be able to be involved again next year.”

At the centre of Porsche Centre Bournemouth’s display was a new 911 GT3 RS. The stand included a pop-up shop of Porsche clothing and gadgets from the Porsche Drivers Selection.

The team also showcased the Boxster S that it stripped and restored to race in the Porsche Classic Restoracing Championship.