Drive Motor Retail is set to increase its presence with Vauxhall in the North East with the addition of three new dealerships through the acquisition of Darlington-based Sherwoods Group.

Sherwoods, which was established as a family business in the 1920s, has announced it is selling its Vauxhall businesses in Darlington, Stockton and Northallerton to Drive following an offer its directors described as “too good to turn down”.

Leicester-based AM100 retailer Drive already has a network of Vauxhall dealerships across the region, including franchised sites in both Redcar and Hartlepool, and will add further scale to its Vauxhall operations through its acquisition of Sherwoods.

Sherwoods managing director, Simon MacConachie, said: “There’s a sadness because we have been known for so long as a highly-respected Vauxhall dealer, but we have decided that this is the right move at the right time for all parties.

“We believe it is a really positive step for the staff because the larger scale of the Drive Group opens up new opportunities that we, as a smaller company, could not pursue.

“Also, culturally we think it will be a good fit for our people. Drive is a high-performing, well-respected group and the offer they made was simply too good to turn down.”

MacConachie said the Sherwoods brand would continue because the deal means investments can be made in other businesses and talks are ongoing with several potential partners.

Sherwoods employs 151 people and the deal was struck on the basis that staff would be given continuity of service, with existing terms protected, a stamen issued by the group said.

Current customer agreements, such as service plans and warranties, will also be unaffected.

Alasdair MacConachie became known as “Mr Darlington” because of his wide range of community commitments and remains chairman of Darlington Partnership and Vice Lord Lieutenant of County Durham.

He said: “We are very proud to have built such a highly-respected family business, with a tremendously loyal customer-base, over such a long time.

“I feel sad that such a successful era is passing but there are exciting opportunities ahead. My priority is for the staff and the customers and it is very important that they will not be adversely affected in any way.

“Sherwoods is a great, trusted brand and it will re-emerge in a new form.”

In June this year Drive published a set of annual financial results which revealed a 117% rise in profit before tax despite a 3.3% dip in revenues in the period to December 31, 2017, following the sale of freehold property.

But AM reported that, although parts sales increased by 13.2% (10.3% like-for-like) and body shop turnover increased by 14.2% during the reported period, the group also realised a one-off profit boost from the disposal of freehold property - amassing an additional profit of £5.96 million. 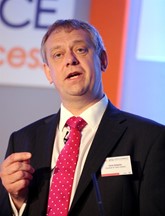 Drive Motor Retail MD Chris Roberts: 'We manage everything to the nth degree'

Drive Motor Retail MD Chris Roberts: 'We manage everything to the nth degree'