Lookers has said that it will continue to be “a major consolidator” after confirming that it is set to complete the acquisition of Jennings Motor Group for an undisclosed sum.

AM exclusively reported the top AM100 group’s move for Stockton-based Jennings a fortnight ago after learning that some staff at the business had been informed of the acquisition.

Today, Lookers has confirmed the move for what it described Jennings – which represents Ford, Kia, Seat and Mazda – in a statement as “a respected and well-established name across the region”.

Lookers could move into second place in the AM100 2019 in light of the acquisition of the £216.6 million turnover operation.

Lookers said today that said its acquisition of Jennings reinforced its position as one of the largest motor retailers in the UK and strengthened its position in the North East, following the purchase of Benfield with 30 locations almost three years ago.

Chief executive Andy Bruce (pictured) said: “The acquisition of Jennings is a perfect fit for Lookers and is aligned to our business model of operating the right brands in the right locations.

“We are delighted to expand our key partnership with Ford of Britain, the market leading brand in the UK.”

Bruce said the Jennings acquisition benefitted the group geographically, joining together our existing Ford market areas in Sunderland and Yorkshire.

He added: “There is a strong cultural alignment between the two companies. Both place the customer at the heart of the business, offer excellence in customer service and attract and retain the best people in the industry.

“I would like to welcome all of the great people in Jennings into the Lookers group. We’re proud to have acquired this highly respected business and we aim to help it to accelerate its growth under our ownership.”

Lookers said in its statement that it aims to be a major consolidator in what remains a highly fragmented market and the acquisition of Jennings Motor Group represents an important development for the business, while it continues to concentrate on operational excellence and consistent organic growth. 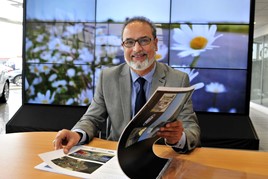 Dr Nas Khan OBE, chairman and proprietor of Jennings (pictured left), said: “The sale to Lookers represents the next stage in the evolution of a company which, just over 100 years ago, was one of the first companies in the country appointed by Ford to sell its cars.

“It is all our employees, past and present, and our customers who have made the business what it is, as well as our excellent relationship with our manufacturers.

“I am proud to hand over the business in such good shape to Lookers, for them to continue with the standards of customer service and care which typifies the Jennings brand.”

But, despite the positive showing, managing director Khan said in his statement within the results for the year to December 31, 2017, that “there was a feeling the market was beginning to tighten” with new car sales down 6% on the previous year.

Khan revealed that the group had cancelled plans for a new £6m flagship FordStore dealership in Stockton due to the effects of Brexit and uncertainty over the future of diesel vehicles.

Speaking after the unveiling of plans for a more modest, £1m upgrade of the existing dealership, Khan said that market conditions had prompted him to reappraise the expansion plans.

“We have decided not to go ahead with the Stockton development as a FordStore,” said Khan.

“As in my report last year, due to the uncertainty caused by Brexit, diesel cars, the slow-down of the new market etc, we did not feel that spending close to £6m was the right thing to do.

“The plan now is to refurbish Stockton at a cost of £1m in order to meet all standards for retail look and style.

“This work should commence during October/November 2018. There are no other developments planned for 2018.”