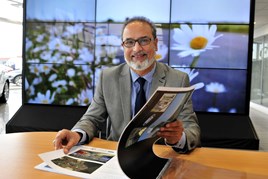 Jennings Group managing director Nas Khan (pictured) has revealed that the group cancelled plans for a new £6m flagship FordStore dealership due to the effects of Brexit and uncertainty over the future of diesel vehicles.

When AM visited the Teeside-based AM100 retail operation in April 2016 Khan revealed plans for a new flagship FordStore at Stockton which was set to be his largest investment to date in the business which holds franchises with Ford, Mazda, Seat, Kia and Mitsubishi.

But speaking after the unveiling of plans for a more modest, £1 million upgrade of the existing dealership, Khan said that market conditions had prompted him to reappraise the expansion plans.

Annual financial results for the group, which were published earlier this month, revealed a £3.6% rise in turnover to £216.6m and a 9% increase in operating profit to £1.6m.

But, despite the positive showing, Khan said in his statement within the reults for the year to December 31, 2017, that “there was a feeling the market was beginning to tighten” with new car sales down 6% on the previous year.

Stating that 2017 had seen more challenging targets to achieve sales necessary for bonus payments from manufacturers, he added: “We have decided not to go ahead with the Stockton development as a FordStore.

“As in my report last year, due to the uncertainty caused by Brexit, diesel cars, the slow-down of the new market etc, we did not feel that spending close to £6m was the right thing to do.

“The plan now is to refurbish Stockton at a cost of £1m in order to meet all standards for retail look and style.

“This work should commence during October/November 2018. There are no other developments planned for 2018.”

Jennings increased staff numbers over the accounting period, from 470 to 519, with the biggest rise in technicians to help drive an aftersales business.