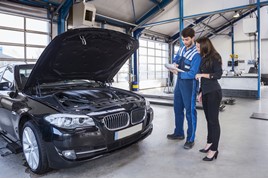 Franchised car retailers have been told to "clean-up their act" after an investigation found that aftersales customer were being charged up to £180 for a 30-minute car diagnostic check.

MotorEasy has reported that Land Rover, Alfa Romeo, BMW and Jaguar dealers are among the franchisees "overcharging" for the initial explorative work, as it revealed the findings of an investigation which revealed consumers aren’t always getting a fair price when it comes to finding out what’s wrong with their cars.

While the check is often free when the car is still under warranty, customers outside warranty face being charged an average of £102 (MotorEasy research conducted June/July 2018 of franchised dealers across the UK) across all 27 manufacturers checked.

MotorEasy founder, Duncan McClure Fisher, said: “The results of our investigation are further evidence of how difficult dealerships make getting a car serviced and repaired.

"Not only do they use confusing jargon, there’s no standard pricing that consumers can follow in order to make sure they’re not ripped off.”

The most expensive bill was £180, quoted by dealers for Land Rover, Alfa Romeo, BMW and Jaguar while the cheapest was a Honda dealer who offered a check for free.

On average, Land Rover was the priciest but also the only manufacturer to quote a standard price across the dealer network. The best value diagnostic checks were to be found at Honda, with dealers charging an average of just £38.

McClure Fisher said: “There’s a reasonable expectation that the price for a simple diagnostic check should be the same for your car no matter which dealership in the network you visit but sadly that’s not the case. The industry needs to clean up its act to start building trust with owners.”

For some manufacturers, prices for checks vary massively within the same network. The biggest disparity for a diagnostic check was at Toyota with one dealer charging £30 and another quoting £155.

Franchised dealers also disagreed on how long the diagnostic check would take, with some telling MotorEasy researchers it was a simple 30 minute job while others claimed they would keep the car for a full day.

The investigation is part of MotorEasy’s ‘Lost in Translation’ campaign that has been launched to save everyday drivers from confusing terminology, unnecessary repairs and untrustworthy service.

The campaign has also seen creation of tongue-in-cheek videos, asking if trade lingo is acceptable.