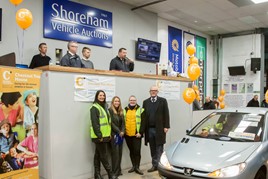 The charity auction, which raised £23,000 last year for the children’s hospice, takes place on Monday, November 19 and this year is extended into the light commercial vehicle (LCV) auction on Tuesday, November 27.

The auction is looking for all running cars and vans, regardless of age, shape and size, with or without an MOT, from dealers across Sussex, Hampshire and Surrey to auction and raise funds for the Arundel-based children’s hospice.

Having first opened its doors in 2003, The Chestnut Tree House currently cares for 300 life-limited children, both at the hospice and in families’ own homes. The hospice offers several types of support which includes; end of life care, psychological and bereavement support and short-break care.

It currently costs well in-excess of £3.5m each year to fund all the care services provided by Chestnut Tree House. The hospice relies heavily on the generosity, help and support of the people of Sussex, including the help received from the south coast motor trade.

SVA received fantastic support from the region’s motor trade with donations of memorabilia and part exchange cars from Yeomans Group, Frosts, Tates, Caffyns Volkswagen, Newton Honda, Dinnages, HA Fox and Harwoods. In addition to the generous donations, for every charity vehicle auctioned, SVA added a further £200 to the sale price, with no additional auction fees.

“The past two years’ auctions have each raised over £20,000 – the support we continue to receive is simply outstanding. However, we always want to push the boundaries and this year will not only see us smash through the £100,000 barrier since we began in 2011 but we would also like to make it three in a row for exceeding £20,000.”

Anyone with a car to gift to the charity auction can email catherine@shorehamvehicleauctions.com or call 01903 851200.