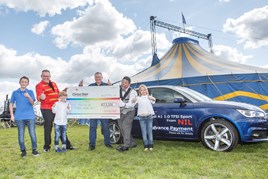 Swansway Motor Group has announced that its quarterly donations to charity Circus Starr have gifted over £40,000 since 2016, thanks to an uplift in Motability scheme sales.

The family-owned business has been supporting Circus Starr since January 2016, and its latest donation of £4,320 has been received by the charity.

Swansway Motor Group’s director, David Smyth, said: “Since the beginning of 2016, we’ve been donating £20 to Circus Starr for each car we sell on the Motability scheme; that’s the cost of one child and their parent or carer going to a Circus Starr performance".

“The number of cars sold on the Motability scheme in the final quarter of 2018 has led to our largest ever quarterly donation to Circus Starr of £4,320; this means we can help more children attend a Circus Starr performance, which is so much more than a trip to the circus, circus, it can be life-changing”.

Circus Starr’s fundraising team trainer, Simone Unett, said: “It’s hard to put into words just how much we value Swansway’s support; one in twenty children are born with a disability; 4.5 million children are living in poverty and would simply never have the opportunity to see a live performance”.

Smyth said: “I’m a dad of three children myself and every time I come along to support Circus Starr I’m humbled by the experience they give these children and their families.

“Seeing how much the children enjoy it, their smiles and their families’ smiles is very emotional for me as a Dad and I’m so proud that our family business is helping Simone and the Circus Starr team make a real difference for other families.”