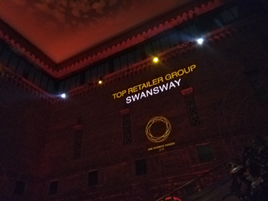 Swansway Group has been named Volkswagen Retail Group of the Year 2018 after its Wrexham and Crewe dealerships were ranked among the brand's five top performing businesses in the UK.

Wrexham Volkswagen topped the ranking after Volkswagen UK delivered the findings of its annual One Business Scorecard system, which were revealed at the brand’s annual dealer conference.

The site was joined in the rankings by Swansway’s Crewe Volkswagen dealership, in fifth place - ensuring that the group was named as Volkswagen Retailer Group of the Year 2018.

Swansway Volkswagen brand director, Ben Gilbert, said: “What a brilliant result – number one in the UK.

“I'm so pleased for every single member of the teams at Crewe and Wrexham, they are all fantastic and this shows that hard work really does reap rewards.”

John Smyth, Swansway Group director, added: “I am absolutely delighted for the group, winning a manufacturer’s award takes consistent hard work and determination, so, I want to say massive congratulations to our Volkswagen brand director, Ben Gilbert; Crewe Volkswagen brand manager, Andy Poole, with special thanks to Gary Wood and his amazing Wrexham team for taking their dealership to number one. What an achievement.”

The Volkswagen One Business Awards are a celebration of balanced scorecard results, which mean outstanding performance in all areas, all of the time, with a bias towards giving great customer service.

Among the other high-scoring Volkswagen franchisees, whose efforts were celebrated on the night, were Heritage Automotive’s Dorchester business, Lookers’ in Northallerton and Listers Group’s Stratford-on-Avon facility, all of which made it into the top five.