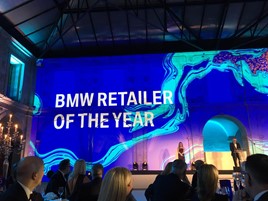 Held in Lisbon, the BMW Retailer of the Year Awards handed a total of 11 accolades to the UK’s best franchised operators, but the Sytner Group-owned Agnew Group site in Belfast claimed the top spot on the night.

Sytner Group also gained recognition itself, with its multi-million pound Sheffield showroom – celebrating its first year’s trading in 2018 – named as the BMW Aftersales Retailer of the Year.

The group said in a statement: “With a body shop spanning 15,000sq-ft and workshop accommodation for over 40 cars, the team at the dealership were delighted to receive this award that recognises an outstanding 2018 performance in what was the first year in their stunning new dealership.”

The team at Sytner Harold Wood were “equally proud” to be named as the BMW Financial Services Retailer of the Year, the group said.

The full list of winners at the annual BMW Retailer of the Year Awards was: