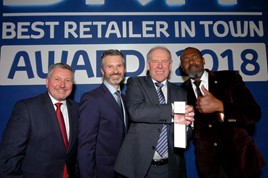 Ron Brooks Motor Group's Toyota in Ilkeston dealership was top of the pops when it landed a BRiT award as Toyota GB’s retailer of the year.

Rather than awards for musical accomplishments, the BRiT (Best Retailer In Town) Awards are an assessment across the UK by Toyota, for which Ron Brooks in Derby Road Ilkeston won the top overall prize.

A total of 182 UK franchised sites were in the running for the Retailer of the Year award, which was presented by comedian Lenny Henry at the St Pancras Renaissance Hotel London, but Ron Brooks's Ilkeston dealership was the one to emerge victorious.

“Regardless of this change, as a family-run business, we continue to make sure the customer is always at the forefront of everything we do, whether it concerns a car sale or service.

“It’s fantastic to know that the Ron Brooks way of thinking is still applauded and recognised by Toyota as the best practice to help customers with all their motoring needs.”

There were 14 prizes in total for categories including awards for customer service, aftersales, performance and more.

Ron Brooks Ilkeston also came second in the ‘People’ award cetagory – which measures the qualification, experience, training of its staff - but several several attempts made by AM to gain access to a list of other Toyota franchisees recognised on the night, attracted no response from the brand.

Founded in 1962, Toyota and Suzuki franchisee Ron Brooks Ltd has been supplying new and used vehicles to customers across the country for more than 56 years.

Having set up the location as a dedicated Toyota dealership over 45 years ago, the Ilkeston branch serves as one of the longest running Toyota centres in the UK.