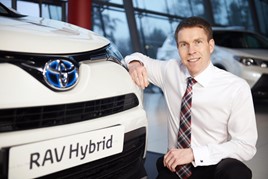 Toyota GB will roll-out a technology-backed hybrid-focused marketing campaign across its franchised car dealer network in a bid to answer customers most frequently asked questions (FAQs).

The Japanese brand, which pioneered the concept of the “self-charging hybrid” across its range of vehicles will gather together the soon-to-be launched Rav4 SUV and returning Corolla hatchback for a special hybrid-themed weekend across its network from February 21 to 24.

Andrew Cullis, marketing director at Toyota GB, told AM that the event would give customers the chance to get behind the wheel of both the new Corolla – which is launched next month – and the Rav4 ahead of its official deliveries in April.

“Dealerships will be dressed to communicate with customers very clearly about Toyota’s hybrid vehicles,” he said. 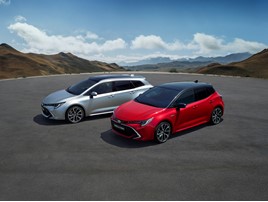 “Frequently asked questions will be answered via graphics in the windows of showroom display vehicles and new iPad-based technology will also be launched at the event, which embraces augmented reality to give an insight into what lies beneath the bodywork of a Toyota hybrid.

“Customers can point an iPad at a car and its strips back the bodywork on-screen to reveal annotated images of the car’s internal workings.”

Speaking to AM at this week’s international launch of the forthcoming Rav4 hybrid, Cullin said that the hybrid weekend was aimed at de-mystifying Toyota’s hybrids and extolling their virtues to potential customers.

He said that a Rav4 marketing campaign would go live across television, social media and online, from April 2.

"In total, during the fiscal year starting in April we will spend £6.5 million on Rav4 marketing," said Cullis, who is also embarking on an Aygo marketing campaign surrounding sponsorship of the returing Shipwrecked 'reality TV' series to Channel 4 this year.

"Rav4 and C-HR are really important vehicles for us, they really draw customers to the brand."

Toyota Group sold 1.035 million vehicles across Europe in 2018, an increase of 3% on the previous year, as its sales of hybrids rose 18% to 46% across the region, which includes Russia.

In Western Europe Toyota’s hybrids accounted for 61% of sales. 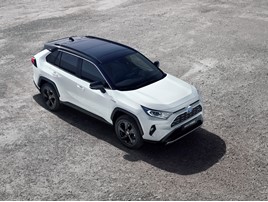 The new Rav4 will offered as a hybrid-only in the UK, with a turbocharged petrol unit available elsewhere in the region.

The new, fifth-generation model sits on the brand’s new GA-K platform and is 5mm shorter and 10mm lower, but 10mm wider, than the outgoing model.

A longer wheelbase delivers greater interior space, however, with the boot growing by 79-litre to 580-litres.

Toyota claims that the new Rav4 is more ‘dynamic’ than its predecessor and the new petrol/electric drivetrain’s 2.5-litre engine and electric motors combine to deliver an improved 219PS (up from 195PS) in the four-wheel-drive variant and 218PS in the front-wheel drive version.

This results in 8.1-second acceleration to 62mph in the all-wheel-drive Rav4 and 8.4 in the front-wheel-drive derivative.

Fuel economy and emissions of 51.2mpg and 102g/km are delivered on the WLTP cycle, meanwhile.

Toyota’s Rav4 will be delivered in a choice of four trim variants (Icon, Design, Excel and Dynamic) with prices starting from £29,635 for the entry-level FWD Icon and topping-out with the £36,640 AWD Dynamic variant.

Toyota to launch Supra halo model in the UK this summer

Toyota to launch Supra halo model in the UK this summer