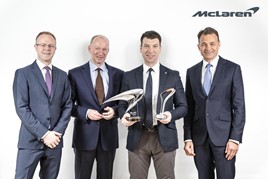 Park’s Motor Group’s McLaren Glasgow dealership has been named as the British supercar brand’s European Retailer of the Year for the third time in four years.

The operation on Bothwell Road, Hamilton, which claimed the brand’s Global Retailer of the Year award after just 12 month of trading in 2015, gained the accolade in 2015 and 2016 before claiming a third award for its efforts in 2018.

Its run of wins was only interrupted last year when Jardine Motors Group’s Ascot franchise claimed the European Retailer of the Year 2017.

David Gilbert, McLaren Automotive’s managing director for Europe, said: “I would like to congratulate McLaren Glasgow on claiming its third McLaren European Retailer of the Year award.

“This achievement is testament to the team’s commitment and I look forward to working together to continue this success in 2019.” 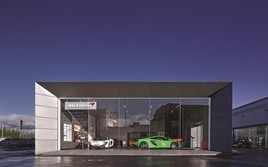 McLaren Glasgow is also an Official Motorsport Retailer and is one of two McLaren Automotive franchised sites operated by the Hamilton-based group, which opened a temporary dealership site in Leeds last year.

Speaking to AM in November last year, Park’s Motor Group director Ross Parks said that the business' performance with McLaren Automotive is “exceeding all expectations” as it prepared to start development of an all-new supercar showroom in Leeds.

The Hamilton-based retail group opened the doors to a temporary retail facility with the British super car maker – its first dealership outside Scotland – in May.

And ahead of groundworks getting underway at the new Leeds site, adjacent to a Park and Ride location on Aire Valley Road, close to junction 45 of the M1, on December 3, group director Ross Park told AM that the business’ first venture south of the border with its motor division was definitely a case of “right opportunity, right time”.

Park said: “After a very successful introduction to the McLaren brand, which included winning global retailer of the year in 2015 and 2016, we were keen to expand with the brand.

“Before we opened our Glasgow facility in 2014 we obviously had a business plan, but the growth of the brand has really exceeded all our expectations.”

He added: “When we looked at Leeds the location was key and we have a really good site, just off the M1, with good access to the A1, which allows us to access sales and aftersales from across the region.”

The McLaren Retailer of the Year Programme has been running since 2015 to distinguish the very best retail locations of McLaren Automotive.

The 2018 edition saw entries from the entire McLaren retail network, including 26 locations situated in the European region.

All contenders were meticulously benchmarked using an extensive assessment process and rated in key areas including sales, customer service, aftersales and marketing.

The overall accolade was claimed by McLaren Beverly Hills.