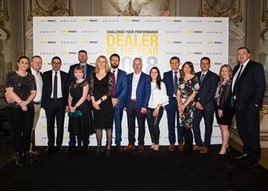 Four high-performing dealers who were awarded commendations at the Renault UK Dealer Conference at the Radisson Blu hotel, near Stanstead Airport, in January, were awarded among the manufacturer's very best from across Europe at a grand awards ceremony at the Stade de France.

The winning dealers were:

Groupe Renault UK’s network development director, Louise O’Sullivan, said: “Great dealers are the lifeblood of any brand, and those that know how to look after their customers generate strong return custom as well as significant conquest sales from other brands.”

As part of their recognition, the dealer representatives attended an evening dinner to celebrate the Dealer of The Year 2018 Laureates from all of Europe, while in addition visiting the Technocentre, Renault’s global R&D centre.

“Each one of our winners has shown an exemplary approach to both customer service and Groupe Renault standards, and thoroughly deserves the pan-European recognition from our parent company,” said O’Sullivan.