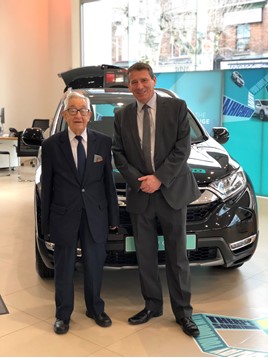 Newton Honda has given the star treatment to a 92-year-old who has been with the dealership for more than 40 years.

During a recent VIP visit to the showroom on Brighton Road, South Croydon, prized patron Mr Bickerstaff met Phil Webb, head of car at Honda UK, who personally thanked him for his loyalty.

Bickerstaff has purchased more than a dozen cars from Newton Honda in his lifetime, and said that he had “enjoyed every one”.

He said: “I have a deep appreciation for Honda because of the reliability of each car, engineering and the supporting customer service. In particular, I like the new CR-V design, it is a brilliant advance over the last model.”

Newton Honda’s sales manager, Matt Dennis, said: “As an engineer, Mr Bickerstaff likes to know how things work; in fact, he reads the handbook for every Honda he owns! He loves the reliability of our cars and the high level of customer support he receives.

“He was absolutely delighted to meet Phil Webb on his latest visit to the dealership.We’d like to thank Mr Bickerstaff for his support over the past 40 years, and hope he enjoys many more years of Honda motoring!”

AM Poll
What is your take on the car retail sector's ongoing vehicle supply shortages? Please leave a comment
Vote
View all
3446