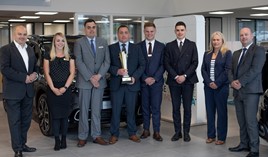 Islington Motor Group has been awarded with Citroen UK’s Golden Chevron award in recognition of an “outstanding turnaround” as part of the brand’s dealer improvement programme.

The franchised operation in Trowbridge almost doubled its market share during the seven months since the start of its participation in the scheme which was introduced by Citroen UK managing director, Karl Howkins, and his team last summer in a bid to drive profitability in the brand’s third quartile of retailers.

Market share for the business improved from 2.6% to 4.6% locally after Citroen’s national performance manager, Sarah Speed, completed a full audit of the business and took a consultative approach to improvements at the site.

“The effect has been transformative,” said Speed.

“Every retailer that has taken part in the programme to date has made improvements, but Islington is a genuine case of success. Everyone in the business really took the bull by the horns and they really deserve this recognition.”

Speaking to AM last summer, Howkins had revealed his plan to assist the 10 to 12 dealers at the bottom of the network’s third quartile in improving their sales and accompanying profitability as part of plans to refresh the network which included the courting of new investors in an effort to inject a new impetus and fill open points along the M4 corridor.

Islington Motor Group has been with the Citroen brand for 40 years, but managing director, Paul Jones, said that the business had “encountered some challenges with market share” at its multi-brand Trowbridge site over the past 18 months to two years”.

“Historically we had always been in the upper quartile in terms of return-on-sale for the network, but more recently we had slipped back.

“Thanks to our participation in the programme, we’re now back in the top 20.”

Jones told AM that, following an initial health check of the business, Speed had highlighted areas of focus that could help improve the retailer’s Citroen operation.

In the months since, he said, a more vigorous pursuit of leads and exploitation of social media marketing had paid dividends.

“Sarah explained that there is no issue with contacting a customer six or seven times to pursue a lead,” he said. “Customers may be reaching dealerships later in their buying journey now, but they are still taking just as long to reach a decision and we were letting them slip off our radar.”

Islington has also recruited its own marketing specialist after seeing the success of social media campaigns.

Citroen UK sales director, Eurig Druce, said: “The award of the Golden Chevron is testament to all the efforts that Islington Motor Group has made through its participation in the programme.

“They have overseen a fantastic turnaround and are well worthy of the recognition.”