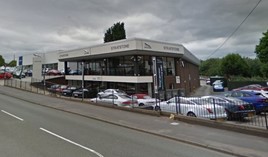 Pendragon’s plan to close its Stratstone Jaguar and Land Rover (JLR) dealerships in Lye have sparked fears for 150 jobs in the West Midlands town.

In a comment issued to the Express and Star this week, a spokesperson from Pendragon said: “We can confirm that we have taken the decision to close our Jaguar and Land Rover dealerships in Stourbridge from July 2019.

"We are unable to comment further at this moment in time.”

Stourbridge councillor Alan Hopwood told the newspaper that he was "sad and shocked" by the planned closure of the sites on Stourbridge Road and Grange Lane next month, adding: "It doesn't help anything in the community, especially with the loss of jobs.”

The Express and Star reported that 150 jobs would be “at risk” as a result of the closure.

Earlier this week Pendragon revealed initial results of an operational business review led by its new chief executive, Mark Herbert, and his team.

Herbert said that it needs to refocus its Car Store used car supermarket strategy as it seeks out “self-help opportunities” in light of an operational business review which predicted that the group would make a significant loss in H1, 2019.

The once AM100-topping group stated that it expected to be to be “significantly loss making” in the first half of the year, with a small loss in underlying pre-tax profits for 2019 as a whole.

Herbert said: "Notwithstanding the challenging market and uncertain macro outlook, the expected loss for the year is still disappointing.”

He added, however, that the business saw” significant addressable opportunities to improve the business and return to profitable growth”.