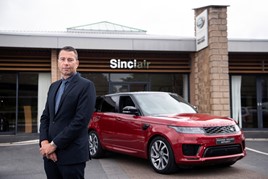 Sinclair Group has added its first Jaguar franchise and a second Land Rover dealership to its growing portfolio with the acquisition of Pendragon’s Stratstone Jaguar Land Rover Swansea businesses.

The South Wales-based AM100 group joined the Jaguar Land Rover (JLR) fold in December last year with the acquisition of Likes Land Rover at Hay-on-Wye from Walters Group and has now increased its representation with the British premium car manufacturer.

While the facilities have yet to be transformed under JLR’s latest Dual Arch corporate identity – bringing both Jaguar and Land Rover brand’s under the same roof – the two brands currently reside in neighbouring facilities on the Swansea Enterprise Park, off Swansea Valley Way.

In an interview with AM earlier this year Sinclair Group managing director, Andy Sinclair said while there were no plans to introduce the Jaguar brand to the ‘Single Arch’ dealership at Hay-on-Wye he would like to add the Jaguar franchise in another location, given the opportunity.

Celebrating the acquisition of the Stratstone facilities this week, Sinclair said: “The opportunity to acquire this business fitted perfectly with our ongoing expansion plan – adding the illustrious Jaguar brand to our portfolio and strengthening our association with Land Rover in the wake of our recent purchase of Likes from the Walters Group.

“The Land Rover and Jaguar operations have been trading on Swansea Enterprise Park for 27 and 12 years respectively so both are extremely well-established at this location and we’re extremely proud to welcome them into the Group.”

He added: “Since 1945, we have built our reputation on delivering the highest standards of personal service to Welsh motorists and we now look forward to extending that unrivalled retail experience to the customers of Sinclair Land Rover and Sinclair Jaguar in Swansea for many years to come.”

All 65 employees of the newly-added JLR facilities will be retained by the business.

In his interview with AM, Sinclair told AM that the group – currently 40th in the AM100 after three years spent in 35th-place – is ready to embrace new opportunities outside Wales, as long as it meets his “right brand, right location” demands.

“We’ve sort of exhausted all the right brand opportunities in South Wales.”