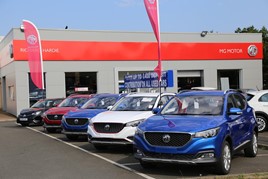 Richard Hardie Group has expanded with the opening of a new MG Motor UK franchised car dealership in Ashington, Northumberland.

The brand’s first MG dealership hit the ground running after selling its first MG before lunchtime on opening day and is now preparing for the arrival of the new ZS EV – MG’s first electric vehicle and already the fastest-selling MG since it relaunched.

MG Motor UK is aiming to deliver a 120-strong dealer network by the end of 2020.

Richard Hardie’s new seven-car MG showroom, on Lintonville Parkway, will also act as a parts centre, alongside its sales and aftersales functions, with an extensive range of accessories for both the MG3 and ZS available.

Richard Hardie MG managing director, Nick Hardie, said: “We were looking to expand our existing brand portfolio and have been impressed by MG’s growth in sales and popularity over the past few years.

“MG represents a true value-for-money offering without compromising on the specification or technology and are set to add more cars to the range in the coming months.

“As Northumbria’s first MG dealer, we’re excited to share our passion for the brand with our customers and look forward to welcoming them into our showroom.”

Interest in the new ZS EV is growing across the country and MG Motor UK announced earlier this month that it had extended its discount offer on the new ZS EV after it secured 1,000 pre-orders for the new model within two weeks of the car's pricing being announced.

MG has extended the offer for the next 1,000 customers.

The first batch of ZS EVs are expected to arrive in dealerships in September, to be delivered to the first customers.

A statement issued by MG Motor UK said that Richard Hardie MG would be central to the role of managing numerous expressions of interest from motorists keen to become EV owners.

In line with MG’s EV Standards requirements, Richard Hardie MG will be fitted with both standard and rapid charging facilities, providing customers with the opportunity to learn more about the electric vehicle infrastructure.

“Richard Hardie MG represents our first entry into the market in Northumbria, drastically improving accessibility to dealer and service facilities. We look forward to working with the team at Richard Hardie MG going forward, bringing both the ZS EV and future models to their forecourt.”

Established in 1974, the Richard Hardie dealership group is comprised of four sites across the north-east.

The new MG showroom joins its existing Fiat franchise in Ashington in an otherwise FCA Group dominated franchised group, including: Fiat, Alfa Romeo and Jeep in Newcastle; Fiat and Alfa Romeo at Silverlink; and Abarth, Fiat and Jeep in Sunderland.